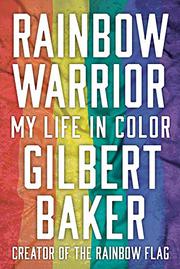 My Life in Color

The audacious life and work of the designer of the symbolic rainbow flag.

Gay rights advocate Baker (1951-2017) passionately charts his rise to prominence from a stifling Methodist childhood in 1950s Kansas, where he secretly danced in his aunt’s old prom dress and became conflicted about his burgeoning homosexuality and obsession with art. Drafted into the Army at 19, he endured a harrowing two-year stint but landed securely in San Francisco at the dawn of the gay rights movement, a sure sign of things to come. Baker writes briskly and amiably about making fast friends and becoming an activist promoting “lavender tolerance and social acceptance.” Though sewing projects kept him busy, he envisioned creating something to replace the pink triangle as the symbol of gay visibility and diversity. Thus, the rainbow flag was born, “a visual metaphor and an active proclamation of power, created and dedicated to gay and lesbian liberation,” and was displayed during Gay Freedom Day on June 25, 1978. Through the darkness of the Jonestown massacre, Harvey Milk’s assassination, and Ronald Reagan’s problematic presidency, Baker and his friends persevered, proudly continuing their dedication to promoting tolerance. His urban activism continued with the charitable Sisters of Perpetual Indulgence, a politically charged organization focused on exposing religious homophobia and sexual oppression. The AIDS epidemic further darkened the atmosphere, and the author vividly illustrates the deadly struggle to survive both the wrath of a mysterious killer and the political unrest that continued to plague gay America. Baker’s legacy as a creative designer and a staunch advocate intertwined when he worked on the NAMES Project AIDS Memorial Quilt with fellow activist Cleve Jones as well as the creation of the epic mile-long rainbow flag that stretched across the streets of Manhattan for the Stonewall 25 commemoration in 1994. Baker’s rainbow flag legacy lives on not only as a key emblematic component during pride celebrations worldwide, but in everyday discourse about the compassionate and unconditional nature of the community it represents and defends.

A moving, educative memoir from one of the innovators of the gay liberation movement.