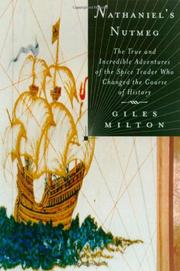 or, The True and Incredible Adventures of the Spice Trader Who Changed the Course of History

Milton (The Riddle and the Knight, not reviewed) deftly and arrestingly captures the sorry history of the European lust for nutmeg and its devastating impact on the Spice Islands. Spices from the Orient were already costly curiosities when 16th-century European pharmacists bestowed upon nutmeg a truly marvelous property: It could cure the plague, they said (and dysentery and sexual torpor and a host of other ailments). As most European cities were disease-ridden pest holes at the time, the value of the rare spice took off like a prairie fire. So started the Spice Wars, a series of squalid, brutal engagements between the English, Dutch, and Portuguese, played out on the small Pacific islands now known as the Moluccas, and recounted here by Milton with beguiling fluidity. Milton traces European involvement with the Spice Islands from the time they were merely an exquisite rumor peddled by spice traders from Constantinople through to the surrender of New Amsterdam to the English in return for the latter’s quitting the tiny nutmeg island of Run, said island defended by the eponymous Nathaniel Courthope, who with a handful of stalwarts, repelled much larger forces of invasion. Along the way, Milton unfurls more treachery and deceit, acts of political subterfuge and chicanery, displays of cruelty and mortification (along with an occasional show of courage and decency, though “the voice of conscience is never loud— in 16th-century mariners, notes the author) than you could squeeze into a pulp thriller. It’s a classic portrait of colonial barbarity that results in the eradication of an entire native population and then ends in a whimper: The British transplanted the trees to colonial Bencoolen and Singapore and Ceylon, and, oh yes, nutmeg didn’t cure the plague either. Milton is a storyteller of the first rank, with a knack for quick character sketches, an eye for what is important and what is dross, and a refreshing sense of humor, even amid the smoke and ruin he so well describes.