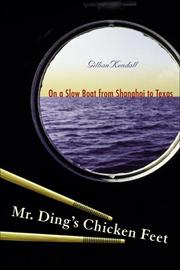 On a Slow Boat from Shanghai to Texas

Myopic memoir about a few months on a ship.

Kendall, a broke grad student, was thrilled when she landed a high-paying summer job teaching English to Chinese men sailing to Texas to work for an oil company. She describes her lovable students, recounts their amusing though predictable gaffes (there was some confusion about the words “penis” and “peanuts”) and explains how she fended off boredom with exercise and the occasional Garrison Keillor tape. Onboard, Kendall had much time to reassess her life. She was contemplating leaving Houston and enrolling in a different graduate program, in Iowa. She was also reassessing her relationship with Martin, the stateside boyfriend she spoke with once a week via satellite phone. Kendall looked forward to these five-minute conversations, but wondered: Did she want Martin to come with her to Iowa? Why didn’t she fantasize about weddings and marriage, as most of her friends seemed to? Why did she instead sometimes daydream about women? Near the end of her trip, when Martin announced his decision to accompany her to the Hawkeye state, Kendall felt a despair she couldn’t explain. Though the author drops hints about past flings with women, and dissatisfaction with her love life is a theme from the start, the story simply ends with Martin picking up Kendall at port. The technical shortcomings here are as evident as the thematic ones. Images, metaphors and analogies are trite (a bad premonition feels like “a brick had been thrown into my stomach”), and the prose is lackluster. Ultimately, the author fails to situate her summer adventures within the larger framework of China’s opening up its economy and the mixed benefits of globalization.

Terrifically banal, despite the unusual setting.