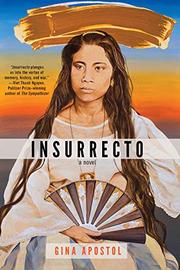 Demanding, baffling, and ultimately exhilarating examination of a forgotten moment in U.S.–Philippine history.

Cinematic in its approach, Apostol's (Gun Dealer's Daughter, 2012, etc.) fourth book alternates between aerial shots, jump-cuts, and close-ups, moving backward and forward in time to get at a story of U.S.–Philippine relations by way of history, literature, language, and scholarship. It even opens with a six-page Cast of Characters, some historical, many from pop culture, a few fictional. While at first the book seems gonzo in its approach, the result is a portrait (though incomplete) of Casiana Nacionales, the insurrecto for whom the book is named, a woman whom "history barely knows." Nacionales was the only woman who actively participated in a rebellion against U.S. servicemen in 1901 after a period of occupation marked by cruelty on one end and breathtaking abandonment on the other. To be clear: The book is not explicitly about Nacionales. Her appearance, like an image emerging on film, serves as a metaphor for how the truth of history is repressed until something or someone brings it into the light. To anchor the novel, Apostol uses two characters: Magsalin, a Filipino writer/translator, and Chiara, a U.S. filmmaker. Their contrasting approaches and accounts of the rebellion ultimately get to what Magsalin and Chiara believe they failed at, of telling "a story of war and loss so repressed and so untold." Magsalin and Chiara may have failed, but Apostol did not. The U.S. may have "manufactured how to see the world," but it's the writers, artists, and other visionaries who speak outside the frame who can reveal the truth. The cast of characters and the out-of-order system of numbering chapters are best revisited after finishing the book.