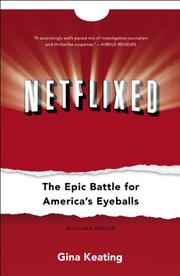 The Epic Battle for America's Eyeballs

Chronicle of the multibillion-dollar bout between Netflix and former heavyweight home-video champ Blockbuster.

Veteran media journalist Keating’s nonfiction debut is a surprisingly swift-paced mix of investigative journalism and thrillerlike suspense. The major players in the game—Netflix CEO Reed Hastings and Blockbuster’s John Antioco—are both complicated characters, and Keating does a commendable job painting a portrait of these very different business leaders, each with his own unique approach to vying for the same brass ring: domination of the American home-entertainment market. Hastings’ management style was coldly calculating, emphasizing the importance of algorithms to the issue of customer service. On the other hand, Blockbuster’s business model was almost Luddite in comparison, as they were convinced that traditional face-to-face transactions with customers would never go out of style. Keating covers the period from Netflix’s inception in 1997, through its lean years in the early 2000s, to its dramatic rise to prominence in the mid-2000s, and its near-downfall in 2010. Dutifully following the strands of Blockbuster’s ignominious decline, Keating also portrays Netflix as being in danger of succumbing to the same monopolistic arrogance as Blockbuster once did. This leaves them open to new business models popping up on the scene, such as the upstart DVD vending-machine service Redbox. Keating does an expert job at taking dry facts and stuffy Silicon Valley CEO types and arranging them all into a propulsive and satisfying narrative.

An impressive look at the infinite complexities and cutthroat competition driving the deceptively simple business of 21st-century movie delivery.