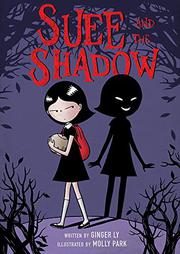 SUEE AND THE SHADOW

Suee Lee is not pleased that she has been transferred from Bustle Elementary on Bustle Street to Outskirts Elementary in Outskirtsville. She chooses to keep to herself rather than try to befriend either “queen bee,” “jerk,” “dim bulb,” or “loser” but gets tangled up in trouble when a strange voice beckons her into the eerie exhibit room at school. Suee wakes up in the nurse’s office, and soon after, her shadow begins to speak, taunting Suee and threatening her classmates. While Suee Lee verbally spars with her own shadow, the creepy vice principal expands his disturbing after-school classes for “zeros.” When students begin to act like zombies and lose their shadows, Suee reluctantly befriends the shy and bullied Haeun as well as the confident and handsome Hyunwoo. The unlikely threesome launch the Zero Detective Club to investigate. The graphics are simultaneously menacing and exquisitely clean, superbly honed in a shiny palette of jet, ash, and crimson. It’s to the author’s credit that readers will be unsure about whom to root for until the very end. The wry writing deftly captures preteen angst, but the story meanders, at times devolving into awkward dialogue, and the embedded moral to the story is tediously corny.

With strengths outweighing flaws, this is a dark yet digestible visual delight with an endearing investigative trio.