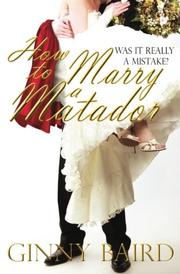 HOW TO MARRY A MATADOR

An American woman traveling to Madrid for an acquisition deal wakes up to find herself married to her dramatic and attractive Spanish colleague; she must decide whether she will seek an annulment or give in to her new husband’s pleas to stay married.

The second novel in Baird’s Girls on the Go series turns the classic romance plot amusingly inside out, starting with the marriage, then the presentation of the new bride to family, complete with a claim of a pregnancy that doesn’t exist, and finally to the courtship that creates the happy relationship. Fernando Garcia de la Vega, heir to the beautiful land that supports his family as well as to the talent of his family bullfighting legacy, will lose the property left to him by his grandfather if he does not marry and produce an heir within the next year. Still, he insists that his impromptu wedding to Jessica Bloom was not mercenary but the hand of fate and opportunity. Jessica, supported by phone calls to her sensible friend Evie in New York, jumps to invalidate the wedding before the paperwork is finalized. But she’s lulled into delaying her plans by Fernando’s mother, European adventure and Fernando’s dreamy accent and sexy smile. A series based on the idea of passion in exotic locales needs to evoke the beauty of the location much more strongly than this novel does. Descriptions of the thrill of being in the Spanish countryside are as lukewarm as those of the romantic chemistry and sexual encounters between the couple. The lack of grand drama also makes it less believable that Jessica—a successful, single businesswoman—would give up her own ambitions for a bit of romance.

Unremarkable contemporary romance, cleverly plotted but vague and implausible in the details, and lacking the spark that makes travel romance sizzle.