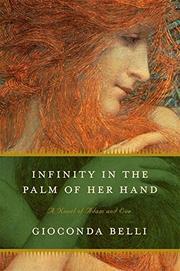 INFINITY IN THE PALM OF HER HAND

Belli (The Scroll of Seduction, 2007, etc.) profiles the First Woman.

The novel, first published in Spain, is a more somber, meditative treatment of the First Family than Elissa Elliott’s Eve (2009). Belli’s Serpent is female, and mischievous, not evil. Instead of tempting Eve, she reveals that the creator, Elokim, is offering humans the option of inaugurating history (with all that labor, heartbreak, chaos and death) or remaining eternally, happily and, one senses, rather dully (for Elokim, at least) cocooned in Paradise. Once Eve chooses knowledge of good and evil, the first inkling she and Adam experience of fundamental upheaval is violent sexual attraction. Uprooted from the Garden (by a cataclysm involving neither Elokim nor sword-wielding angels), Eve and Adam seek shelter, figuring out everything for the first time. That stomach pain? Hunger. Those previously friendly beasts? Predators—and prey, when Adam discovers that, unlike Eve, he’s not a vegan at heart. Blindsided by her nausea and swollen belly, Eve and Adam puzzle out pregnancy, childbirth and nursing by observing animals. Eve bears two sets of fraternal twins, first Cain and Luluwa, then Abel and Aklia. Unlike Elliott, Belli doesn’t posit the existence of other humans in Adam and Eve’s milieu (although Eve encounters helpful monkeys). Thus mankind’s mandate to go forth and multiply entails incest. A rare directive from Elokim, however, forbids the coupling of each son with his twin sister. But Cain prefers beautiful Luluwa to Aklia. When Cain murders Abel, resulting in his and Luluwa’s exile, the Serpent has mating suggestions for Aklia that will resolve the reproduction, not to mention the evolution, dilemma. Although slowed by philosophical rumination, this narrative presents Adam and Eve and their offspring as individuals, not archetypes.

A realistic portrayal of the children of a laissez-faire God.