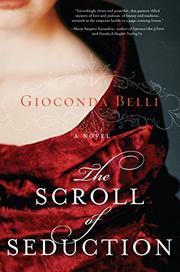 THE SCROLL OF SEDUCTION

Nicaraguan poet, novelist and memoirist Belli (The Country Under My Skin, 2002, etc.) offers a beguiling feminist take on the frustrated life of a 15th-century Spanish queen.

The tortuous saga of Juana of Castile, daughter of Isabella and Ferdinand, who spent 46 years of her life locked away as a madwoman, is evoked through an illicit modern-day love affair. Now 17, Lucía has been a student at a Madrid boarding school for four years, since her Latin American parents died in a plane crash. Much older Manuel, a professor specializing in the Spanish Renaissance, is obsessed with Juana’s story and much taken by Lucía because she looks remarkably like the queen. Manuel seduces the willing virgin by dressing her in a period costume and mesmerizing her with a longwinded narration of Juana’s life: Beginning with her birth in 1479, the tale takes a dark turn with Juana’s passionate marriage at age 16 to Philippe the Handsome, Archduke of Burgundy, whose ties to the Hapsburg line are politically desirable but later disastrous. The novel moves fluidly between the Renaissance and the present, with both stories narrated in the first person, as if Lucía is indeed possessed by Juana. The Spanish princess bears many children for Philippe and overlooks his infidelities while she grows increasingly isolated living away from her family. After a series of unexpected deaths, Juana is in line for succession as queen of Castile but is thwarted and imprisoned through the machinations of her husband, father and son (who became Holy Roman Emperor Charles V). In the present, young Lucía becomes pregnant and is ensconced in Manuel’s childhood home, where his Aunt Águeda watches over her. Also surveying Lucía are the ghosts of Manuel’s ancestors, the Denias, who were appointed to guard Juana but ended up looting her effects. Belli’s historical savvy and skillful use of novelistic devices render these intertwined tales powerfully compelling.

An intricate, sexy historical narrative, exploring the triumph of individual will over masculine coercion.