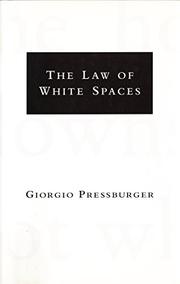 THE LAW OF WHITE SPACES

An interestingly old-fashioned kind of book: five tales narrated by fictional European doctors about the mysteries of illness and the body. In the title story, a doctor loses his memory most crucially, devastatingly, on the occasion of having to say Kaddish for his dead brother. In ``The Clock of Life,'' a doctor entwines with the life of a patient whose existence has been calibrated to the doctor's in ways he never suspected. ``Bahdy's Disease'' finds three brothers sure they'll die in exactly the same way, allowing their doctor to see that ``forms of illness and even causes of death are no more than symbols. It is not the mechanism itself which is important...but that which the mechanism is trying to express.'' Pressburger, a Hungarian director now living in Italy, has good hold of the vexing essentials in his theme—but his narrative technique, especially in the longest story, ``Vera,'' is unsure. It stutters, jerks, derails at the hands of free-floating metaphors, re-armors itself in self-consciously elegant Weltschmerz and upholstered obsessions. Surprisingly, the most emotionally connecting strand here—starkest in one small section of ``Vera'' and in ``Choices''—is not the mystery of illness and death but the unbearable pathos of a grown child having to leave old parents behind, leaving them to bear their ends alone.