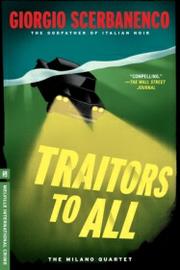 After three years in prison for euthanasia, Dr. Duca Lamberti (A Private Venus, 2014) returns to the practice of medicine in an equally unlawful and even more sordid way in this second volume of the noirish Milano Quartet, first published in Italy in 1966.

Lamberti’s medical license has never been restored, but that amounts to a positive recommendation for Silvano Solvere, who’s looking for someone to perform a hymenoplasty on a nice girl who wants her bridegroom to believe that she’s never had sex. The procedure goes smoothly enough, and Giovanna Marelli returns to her fiance, butcher Ulrico Brambilla, a virgin once more. Only two things bother Lamberti: the fact that Solvere invoked the name of attorney Turiddu Sompani as an introduction to Lamberti and the fact that he left behind a suitcase to be kept until called for. Sompani’s Fiat has just gone into a canal, the Alzaia Naviglio Pavese, with the lawyer and his cousin Adele Terrini, aka Adele the whore, inside. And the suitcase turns out to contain a beautifully engineered submachine gun. With the help of his friend Superintendant Luigi Carrua of the Milan Police, Lamberti decides to accompany Margherita, the young lioness sent to pick up the parcel, to her own drop-off. The trail will take them from private to ever-escalating public vice: a ring of drug and arms smugglers, a rash of deaths past and present, and a shameful betrayal reaching back to WWII.

Carrua is right on the money when he tells Lamberti, “[y]ou want to eat up the criminals.” This illegal doctor’s righteous fury comes to a head with the most admirable character in the cast facing a long prison term.