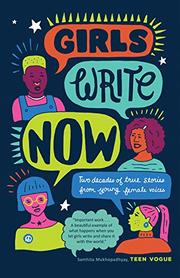 A diverse group of teenage girls from New York City offer glimpses into their lives in this collection of short autobiographical essays interspersed with pieces of advice from leading women authors of today.

As a shy eighth-grader, Diamond Abreu found a sanctuary that released her inhibitions in the world of a comic-book store, showing how passion can open doors and build bridges. Dominican immigrant Alexa Betances muses over a photo of the father, who unexpectedly abandoned her family when she was 3, while Charlene Vasquez claims her autism as her own normal and speaks out against stereotypes. Iemi Hernandez-Kim wisely points out the futility of the metal detectors installed in her school, referencing a student who used a house key as a weapon against a security guard. Jennifer Lee reflects on her mother’s sacrifices, both in leaving Korea and in all she has done for her daughters in America. This volume gives the girls a platform to share some of their most intimate stories. In between essays, Chimamanda Ngozi Adichie sums up this collection by encouraging young women to embrace the honesty of their stories and refuse to succumb to fears about likability. Elsewhere, Francine Prose speaks to the power of writing to allow us to freely express ourselves.

A celebration of young female writers that would be a great addition to classroom shelves as an inspiring example of honest writing.