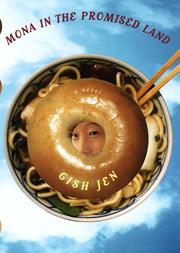 MONA IN THE PROMISED LAND

``American means being whatever you want,'' the intensely bright and high-spirited protagonist of Jen's second novel (after Typical American, 1991) declares to her mother early in the narrative, and this droll, moving work presents an unsparing analysis of the allure and tolls of that freedom. Mona Chang offers a first-person record of her life from 1968, when she is in the eighth grade, to adulthood. She is the daughter of Chinese immigrants, Helen and Ralph, who have worked determinedly to discard the more obvious habits and tastes that might mark them as being too foreign; they have even (grudgingly) accepted that Mona and her sister Callie will inevitably lead lives far removed from most Chinese traditions. Grasping just how far, though, is the problem: Mona, feeling increasingly unmoored when her parents move to wealthy Scarshill, New York, believing that she needs to belong to a minority prouder of its identity and traditions, decides to convert to Judaism. Her decision unnerves not only her parents but the wider community, yet she stubbornly perseveres in the first of several rebellions. Woven through Mona's often witty narrative of her adolescence, of her struggles both to fit in and to stand apart, of her first hesitant experience of passion, is her determination to live outside both the expectations of her parents and the blithe stereotypes of society. Jen, who misses little, renders the status-laden particulars of life in Scarshill with the specificity of an anthropologist, and she catches the enthusiasms and prejudices of the 1960s and '70s with a documentary-like zeal. Mona describes all of this in a voice that is earthy, vivid, and convincing. In tracing the (guardedly triumphant) struggles of one young woman to be herself, borrowing from a variety of traditions without being constrained by any of them, Jen gives us an affecting story- -precise, often very funny—and a wonderfully idiosyncratic heroine.