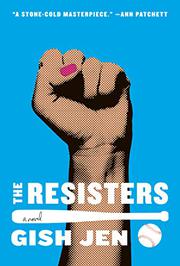 Subtle dystopian fiction from the author of World and Town (2010).

It’s the not-too-distant future, and the United States has become AutoAmerica. The citizenry has been divided into the Netted and the Surplus. The job of the former is to rule, while the primary function of the latter is to consume. These are new social classes, but, as Grant, the narrator, notes, they look a lot like the old social classes. The Netted are “angelfair.” Grant is “coppertoned,” and his services as a professor are no longer needed. Eleanor, his “spy-eyed” wife, is still practicing law, though, mostly fighting on behalf of the oppressed; when the novel begins, she has just been released from prison. What's most remarkable about the worldbuilding here is that the sense of horror that suffuses so much dystopian fiction is absent. Grant’s tone is wryly matter-of-fact—perhaps because, as a dark-skinned person, he never took the freedoms and opportunities he once had for granted. And, really, the totalitarian country he describes is entirely believable. It’s not the product of a single cataclysmic event. It is, instead, the result of a million seemingly inconsequential actions, the cumulative effect of citizens giving away little pieces of their agency every time they choose convenience over autonomy. But life changes for Grant’s family when the government decides to resurrect the sport of baseball, because it happens that his daughter, Gwen, is a pitching prodigy who has spent her childhood honing her skills in an underground league. Baseball offers a way out and up for Gwen, but she’s not sure that what she would gain is more valuable than what she would have to leave behind. The juxtaposition of America’s pastime and the AI–enabled surveillance state Jen presents here is brilliant. Sports are a classic national obsession as well as an avenue to fame and success for the disenfranchised. In this sense, Gwen’s story feels familiar, and the ease with which the reader identifies with this narrative helps to make everything else about AutoAmerica seem eerily familiar, too. We recognize the world Jen creates because it is, finally, nearly identical to our own.