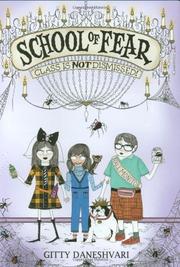 CLASS IS NOT DISMISSED!

From the School of Fear series, volume 2

The four phobia-afflicted friends who bonded in the Marx Brothers–style School of Fear (2009) face a worse threat than backsliding (though there’s plenty of that too) in this equally manic sequel. With solid mutual bonds generally hidden beneath layers of sharp repartee—“I think you need help...and I don’t mean that in a kind or caring way”—Lulu, Madeleine, Theo and Garrison reunite for a second summer at the isolated Massachusetts institution run by wacky ex– (except in her own mind) beauty queen Mrs. Wellington and her long-suffering octogenarian cook/caretaker Schmidty. Joined by an aggressive new student, Hyacinth, whose lack of social skills is only matched by her hysterical fear of being alone, the crew first looks into a series of house burglaries, then learns that a reporter is planning to publish an exposé that will certainly force the school to close. Staving off this catastrophe turns into a continuing plot that will run into at least one further episode. Making sense of the setting, wild antics and over-the-top characters requires reading the opener, but Daneshvari expertly keeps the humor fresh and the pacing frenetic. (Farce. 11-13)