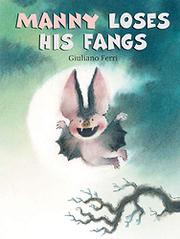 An anthropomorphic vampire bat learns how to use his scary fangs to help his friends rather than frighten them in this Italian import.

Manny the vampire bat wants to be the scariest vampire bat in the world. But after his “baby fangs” fall out, Manny fears “his scaring days [are] over.” The silver lining to this is that he is able to make friends with other animals now that he’s not so scary anymore. He enjoys having friends so much that, in a reversal, when his adult fangs grow in, he fears losing his new companions. But instead, his scary skills come in handy, and he intimidates some taunting bullies. Ferri’s beautifully soft illustrations are a smart contrast to the intensity of a vampire bat, giving Manny just enough ferocity without making him truly terrifying to young readers. The icy blue-gray tones of the cave, along with the rich, warm skies and fields, make even the scenery a character. Despite its animal protagonist, this story is one to which many readers can relate, with its theme of fitting in and finding friends. Manny is quite the likable antihero. The story itself has just the right beat, not dwelling too long or moving too quickly. There is some wonderfully rich vocabulary for the intended audience, too: words such as “trotters,” “sulked,” and “admiration.” The book wraps up nicely with a subtle message of being oneself.

Surprisingly charming and with delightful illustrations.