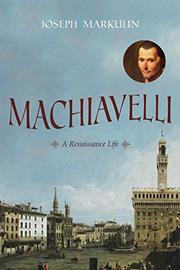 A bland “nonfiction novel” about the life of the civil servant who lent his name as a byword for self-serving machination.

The notion of a nonfiction novel owes much to Truman Capote, whose In Cold Blood was so branded owing to a few gaps that he guessed at in the exchanges between major characters. In the case of the 15th-century Florentine Machiavelli, there are scarcely more than gaps: some surviving letters, testimonials from contemporaries and, of course, Machiavelli’s own writings, most famously The Prince. Why Markulin chose to cast Machiavelli’s life in the form of fictive back and forth is anyone’s guess, but the dialogue is quite staggeringly uninteresting and quite Middle American: “ ‘Do you think he’s guilty, Pagolo?’ said Rinuccio. ‘Guilty? Hell, yes! Guilty of being a goddamn public nuisance.’ ” Machiavelli himself has all the narrative zing of a grocery clerk in Piscataway, though Markulin correctly portrays him as a man smart enough to be able to read the political winds and adapt accordingly in a time when Italy’s powerful families—Medicis, Sforzas and so on—were falling upon and hacking each other up with wild abandon: Old Niccolò was the original survivor, if not the comeback kid. There are a couple of nice and defensible turns, such as Machiavelli’s run-ins with a very stern, very bad local archbishop whose behavior taught him a thing or two about power and its application. And Markulin does get most of the historic details correct (notably the bad smell of medieval streets, to which he often returns), but what is actual history in these overabundant pages is textbook-ish and didactic. The overall effort is a ham-fisted blend of historical novel, with none of the grace of a Mary Renault or Robert Graves, with documentary script for some lesser version of the History Channel, one that allows for plenty of smelling—and bad aromas.

Disasters and the American State
by Patrick S. Roberts
Indie

ON POLITICS
by Alan Ryan
Nonfiction