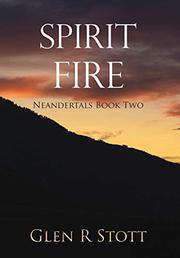 An alliance of two clans is threatened by a new enemy in the second installment of Stott’s (Impanogos, 2015, etc.) Neandertals series.

The journey of a young Neandertal girl named Kec, which began in the last book, has led to a powerful alliance between her people and the Cro-Magnons. Prosperous and peaceful, the two clans have lived in harmony now for generations. After Kec dies, the alliance stays strong, as each tribe uses their unique skills and knowledge for the well-being of all. But their peace is eventually disrupted in 3,304 B.C.E. by a power-hungry outsider named Warlog who believes that members of the alliance will eventually destroy his people. With the sudden threat of Warlog’s gathering an army and preparing to attack, the two tribes must figure out a way to stay strong in the midst of chaos. With time running out, the 20,000-year-old alliance will truly be put to the test. This series installment’s prose style is consistent with the first one in mood and tone; again, the account of gritty daily life in a prehistoric era is compelling even as it’s slightly unsettling. This time around, however, the dialogue has a bit more complexity than before, with longer sentences and descriptive words—which makes sense given the amount of time that’s passed. As a result of the time skip, there are many new faces in the cast that add interest and diversity, and several of them, such as shaman Rayloc; a historian named Sotif; and warrior Tincolad, are introduced at length in their own chapters. With the alliance hanging in the balance, the new players also bring an intriguing sense of competition to the proceedings. At one point, for instance, Sincolad, a young man who is soon to inherit his father’s chiefdom, is described as somewhat of an impostor in Rayloc’s view: “He never took his hunting lessons seriously. He was not fit to lead goats, let alone a village.” Although the book is somewhat brief—there are only seven chapters and fewer than 250 pages—it still reads like a hefty, historical epic, with events slowly boiling into a climactic finale.

A sweeping tale of survival and loss.

HEART OF THE BISON
by Glen R. Stott
Indie

SEARCH FOR THE HEART OF THE BISON
by Glen R. Stott
Newsletter sign-up