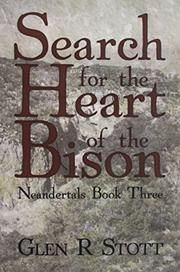 SEARCH FOR THE HEART OF THE BISON

In a change from the prehistoric tales in the first two series installments, this one takes place in a more modern milieu—the early 21st century, to be exact. There are also new characters with new dreams and aspirations. Sandi Hartwell is a hardworking young archaeologist who’s been searching for fossil evidence that would prove the Neandertals and Cro-Magnons produced offspring. When she finally does find such evidence in Pakistan—apparently guided in her quest by a dream—she almost can’t believe her luck. But after the 9/11 terrorist attacks, any hope of a flourishing career in Pakistan seems to disappear—at least in the short run. Luckily, Sandi eventually manages to return to the country and to the site of her discovery, but what she doesn’t know is that there are still a great many surprises in store for her—particularly after a sudden turn in the second half of the novel, which adds an SF twist, taking the tale of the Neandertals into truly alien territory. Still, as a romance begins to flourish between her and a handsome Neandertal expert, Garret Chambers, Sandi strives to fulfill what she believes is her destiny. Throughout this entry, the prose style—and most noticeably, the dialogue—are refreshingly modern, compared with that of the other books in the series. However, the sudden change in genre about halfway through the story may be a bit difficult for some readers to follow, as plot starts to get more complicated than readers may be prepared for. Nonetheless, the author does a good job of keeping events moving along steadily. The love story between Sandi and Garret also adds a much-needed sense of humanity to the spacey storyline, and it effectively serves to deepen its emotional stakes.

HEART OF THE BISON
by Glen R. Stott
Indie