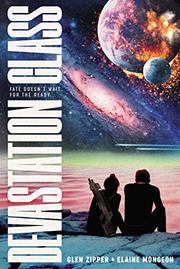 Teenage cadets must fight battles both within and outside their ranks to survive the unknown.

When the Kastazi—an alien race fleeing a dying planet—came to Earth, it started the Nine-Year War, but the Alliance destroyed them. Now in peacetime, the Alliance has launched the Explorers Program, selecting only the most elite cadets who will be future leaders. Leading them are JD and Viv. Overwhelmed by the program’s challenges, JD has been sabotaging himself. Meanwhile, Viv is consumed by the events surrounding her father’s death when new evidence of what happened appears. But none of that matters when their battleship, the UAS California, is unexpectedly attacked by a Kastazi Destroyer. The moment the cadets thought was far off is suddenly present: Seizing control of the ship, JD and Viv take risk after risk to fend off hostiles as the deep-rooted distrust between civilian students and cadets mounts. Just as the cadets think they’ve found respite, a new mystery unfolds, leaving them searching for answers. Readers who don’t mind the near-glacial buildup laying out the history with precise, technical language will be rewarded with the action that follows. Although there are several alternating first-person voices, JD and Viv are the most well-realized characters; their peers fall flat. Readers may get lost in the dialogue, as speech indicators are sparse. Main characters are cued as white; names suggest some ethnic diversity in the supporting cast.