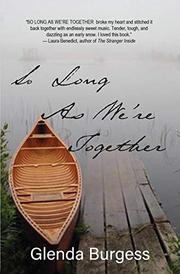 SO LONG AS WE'RE TOGETHER

Marley Stone, who has been writing hit songs for her twin sister, Andi, a country music star, for more than 20 years, is beginning to wonder whether she can do it any longer. After breaking up with her boyfriend of six years, she heads north from Seattle to the cabin in the woods where she and Andi lived with their flighty, determined mother, Donna, and where Donna has recently, and mysteriously, killed herself by stepping into the nearby lake with rocks sewn into her pockets. Intending to clear out both the cabin and her mind, Marley finds her life complicated by her old high school boyfriend, recently and possibly only temporarily separated from his wife, and by an abusive man from her past who has begun stalking her. At the same time, she tries to solve the mystery of a letter her uncle claims Donna received from the father Marley and Andi never knew. Burgess crams more action and characters into a weekend than it can comfortably handle—particularly by the time Andi and the majority of her high school class show up at a bar—and the male characters tend to be one-dimensionally good or evil, but the relationship between the twins is believably complex. Even Donna, who could easily have become the stereotypically unhinged mom, is intriguingly complicated, unknowable to the end. Burgess evokes both Seattle and the Idaho countryside in sensuous detail and effortlessly weaves the process of music-making into the story.

A touching exploration of two sisters pulled by the past.