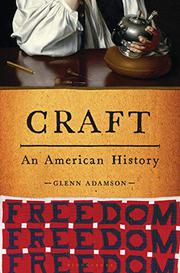 A rich chronicle of craft in America from Jamestown to the present day.

In his latest book on craft, historian and curator Adamson displays his vast knowledge of crafts, artisans, and political and business figures who have helped or hindered craft’s advancement. He notes the evolution from craft-as-survival to its current status as a much smaller—but significant—part of our overall economy. He also sees its potential as a way to begin to reunite a divided country. (The author has a couple of harsh comments for Donald Trump, at one point calling him a “farcical blowhard.”) Adamson leads us on a chronological journey through American history, pointing out along the way—sometimes in lush detail—the various craft movements and ideas that were prominent at certain times. The text swarms with interesting anecdotes and names—some well-known (Benjamin Franklin, Henry David Thoreau, Martha Stewart) and others who will be less familiar to most readers: James Pembroke, the first Black man to attend classes at Yale; Candace Wheeler, one of America’s first interior designers, who “realized what many of her fellow craft reformers did not: that beauty and practicality did not always go together, and were often in conflict”; and Juliette Gordon Low, founder of the Girl Scouts. Throughout the narrative, the author displays a sensible sensitivity to various cultural, racial, and gender issues that remain with us—from the brutal treatment of Native peoples and African Americans to the denial of equal labor rights (and salaries) to women. Adamson also corrects some myths, noting that there’s no real evidence that Betsy Ross sewed the first American flag: “The thing everyone knows about her…turns out to be uncertain at best, and perhaps an invention from whole cloth, put about by over-enthusiastic descendants.” The author offers welcome details about such topics as repressive schools for American Indians (e.g., Carlisle Indian School) and Rosie the Riveter.

Thoroughly researched and written with passion—and a bit of bite.