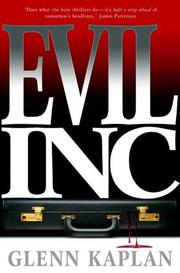 A rising exec intent on clawing his way to the top finds that the claws of his competitors and apparent allies are sharper than his in this high-fatality, low-suspense thriller.

Ken Olson, a “tall, thin 34-year-old executive with blond hair and pale blue eyes,” is on the fast track. Despite repeated pleas from his loving wife, Sandy, to move to a smaller company than Ayvil Plastics, he’s determined to impress the new hatchet man, Executive Vice President Tom Pennington, during their tête-à-tête on the way from the airport. It all works better than Ken could have dreamed. Pennington instantly accepts Ken’s plan to cut costs instead of closing the plant and names Ken Division Director. But sharks are already circling Pennington himself. Ayvil CEO Arch Paulson, furious that he isn’t shutting down Ayvil Plastics, is hatching plots to discredit him with all the fire-breathing gusto of a Shakespearean baddie, and soon a breathtaking act of industrial sabotage claims a thousand lives at the plant. Ken, a broken man, is turned into an avenger by a further backstabbing coup de grace. Joining forces with Sandra’s brother, industrial-security expert Phil Lambert, he resolves to go after the men who ruined him. That’s a tall order because (1) there are lots of them, (2) they’re fabulously wealthy, powerful, manipulative and unscrupulous, (3) they’re not necessarily the guys Ken thinks they are (though few readers will be so guileless). Kaplan (All for Money, 1993) keeps the pot boiling vigorously, provides low-key guidance to the Machiavellian plots and counterplots hatching in half a dozen executive suites, and confirms every dastardly stereotype his enormous target audience has about big business: “Mass firing? Mass murder? It’s such a short step.”

On the downside, there’s little mystery, less danger to the hero and a clunky prose style that makes Joseph Finder, who owns this territory, sound like Proust.