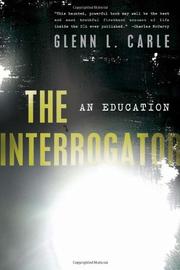 From a 27-year CIA veteran, a thoroughly documented insider’s view of illegal activities undertaken on the “dark side” of the global war on terror.

As an experienced CIA spy, Carle came to the conclusion that there was a major disconnect between the White House’s Global war on terror and the reality he experienced. In the aftermath of 9/11, he was assigned to interrogate a suspected top al-Qaeda terrorist. He details the battles which followed, at least as much as possible under the conditions of CIA censorship—black boxes in the text indicate the work of Agency redactors. At the beginning, Carle was asked what he would do if he was required to violate not only the letter of the law, but also his own standards of honor and duty. Previously acquired interrogation skills led to him to the conclusion that his prisoner was not the man his captors believed him to be. He was neither a leader of al-Qaeda nor someone who possessed useful information about terrorism. Nonetheless, Carle’s conclusions were of no effect against the process that was underway. This was only one incident that the author considers indicative of a pattern of the CIA and the White House ignoring evidence that conflicted with the official policy narrative. By the end of the assignment, Carle was questioning how the United States had been reduced to such utter lawlessness. He believes there are still remedial steps that need to be taken to address what he calls a self-created problem of narrow perspective, hyped threats and deluded perceptions. Among them, he advocates the formation of a “Truth and Reconciliation Commission,” similar to the one legislated into existence by the South African parliament after the end of apartheid.

Firsthand knowledge of what many have already suspected about the American intelligence community’s methods.