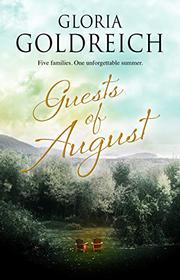 Five families return to a New Hampshire country inn anticipating a long summer idyll. Will the simmering tensions boil over, or will the long, sunny days work their magic?

Novelist Daniel Goldner, who’s been coming to Mount Haven Inn since he was a boy, is seeking solace as his marriage founders. Economist Simon Epstein, his longtime friend, is there for him along with Simon's free-spirited wife and three teenagers. The Edwards family has also been coming to Mount Haven for years, keeping their family vacation inviolate. But this year, as their teenagers squabble and the marriage has lost its luster, Susan Edwards has smuggled in a golden professional opportunity to translate a much-lauded new novel from the French. She’s eager to learn what the novel, which portrays a marriage on the rocks, has to say about her and her husband, Jeff. Grasping Liane Curran sees summering at the inn as a way to experience the ways of old money while her desperate husband, Michael, is hoping for an infusion of that money into his teetering startup. Patrician financier Mark Templeton and his carefully groomed, alcoholic wife, Andrea, return from California to New Hampshire every August to commemorate the loss of their son, Adam, and to offer their condolences to the widow and son he left behind. Wendy and Donny Templeton, who live not far from the inn, dutifully roll up for this mournful ritual of sternly enforced family bonding. Author Goldreich (After Melanie, 2019, etc.) litters the tale with details that read more like 1969 than 2019: A teenager wears Jean Nate perfume; a college student drives a “roadster”; women under 70 wear their hair in “lacquered helmets”; the developer of cutting-edge software has his spreadsheets on paper. Whatever the incidental details, the characters are all seeking an old-fashioned summer: antiquing, kayaking on the lake, piecing together puzzles, and turning to each other for comfort and renewal.

Ambling and impossibly old-fashioned: a melodrama in which nothing much happens.

THAT YEAR OF OUR WAR
by Gloria Goldreich
Fiction