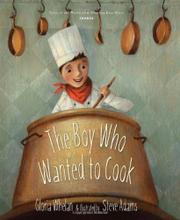 THE BOY WHO WANTED TO COOK

A fictional companion to the publisher’s E Is for Eiffel Tower: A France Alphabet (2010), this entry in the Tales of the World series weaves French phrases into a blasé story about 10-year-old Pierre, whose father is owner and chef of a quaint restaurant near the Tarn River in the south of France. Although he sees the world as “one big beautiful meal,” his father (depicted as the quintessential portly chef with bulging, expressive eyes, a thin handlebar moustache and a white toque) thinks Pierre is too young to cook. After a restaurant critic asks the boy for directions to his family’s restaurant, Pierre decides that honor demands that he refrain from telling them the critic’s identity. Instead, he announces that a stranger from a long distance will be dining with them and scurries to pick local delicacies, including the first morilles (wild mushrooms) of the season. When his father refuses to use them in his signature beef dish, Pierre secretly adds them and not only wins the restaurant a star but his father’s pride for his cooking skills and honor. While Adams’ acrylic paintings on board lend a charming, folksy feel, the narration focuses more on French phrases rather than the culture. Only Francophiles will overlook the didactic messages at the conclusion.