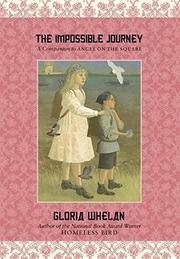 The year is 1934, and Stalin has begun his own reign of terror, rounding up political dissidents under the slightest pretext. When Marya and Georgi’s parents are taken by the NKVD, they find themselves alone in Leningrad with no support beyond a couple of greedy neighbors. Their mother is relocated to Siberia, their father to a gulag; despite the thousands of miles between them, the children, 13 and 7, respectively, set out alone to join their mother. Whelan, returning to Russia after Angel on the Square (2001) (whose young protagonist is Marya and Georgi’s mother), paints a picture of a country where all live in fear and propaganda has taken over school curricula. The children navigate this perilous terrain with the help of some few good souls and heaps of luck. Chief among these heaps of luck is the convenient group of Samoyeds who befriend the children and take them north on reindeer back; this provides both a charming interlude and a credibility-stretching piece of narrative strategy, turning their improbable journey into a truly impossible one. Marya’s first-person narration effectively conveys the frustration of an older sibling desperately trying to keep a much younger one in line, but otherwise displays a degree of detachment that renders her more a reporter than an actor. Regrettably enough, the Soviet believers exist only as types, making for an unsubtle delineation between good and evil: “Comrade Tikonov stared coldly at me. . . . She gave a cruel laugh.” Like its predecessor, this offering takes 21st-century American readers back to a time and place largely ignored in children’s literature; it is a pity that this time and place are not made more immediate and vivid. (Fiction. 9-13)