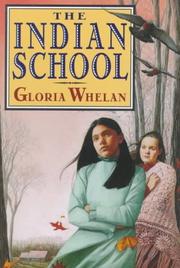 After her parents die in a wagon accident, Lucy, 11, goes to live with her missionary aunt and uncle, the Wilkinses, who run an Indian school in northern Michigan. Aunt Emma is a taskmaster, while gentle Uncle Edward makes Lucy feel welcome. When Lost Owl asks the Wilkinses to take in his two children for the winter (the only members of his family to have survived a smallpox epidemic), Aunt Emma refuses, but Uncle Edward insists. Raven, who is about Lucy's age, and her younger brother, Star Face (later called Matthew by Aunt Emma) come to stay, and from the first, Raven and Aunt Emma do not get along. Raven rebels against school rules, refuses to answer to the name Aunt Emma gives her (Eleanor), and generally acts like a hellion. When Aunt Emma forbids her to see Matthew, Raven runs away. Only when Matthew becomes desperately ill—a combination of pneumonia and chicken pox—does Raven return. Whelan's (Once On This Island, 1995, etc.) plot is contrived, and her characters who never come off the page; Aunt Emma's stern manner is tiresome. Still, the friendship between Raven and Lucy as they come to understand each other is a good lesson for readers that never seems didactic. (b&w illustrations, not seen) (Fiction. 7-10)