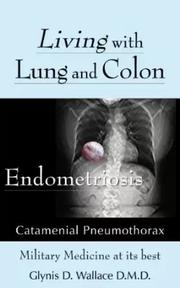 LIVING WITH LUNG AND COLON ENDOMETRIOSIS

A plainspoken chronicle of living with a dreadful case of a difficult-to-diagnosis disease.

What started as a minor pain just below her ribs would soon begin to impact the author’s breathing, and she was eventually diagnosed with pulmonary endometriosis. Endometriosis usually affects the mucous membrane of the uterus, but it can also be a traveler, with endometrial implants attaching themselves to the colon and the lungs. The tissue of the implants sheds, causing a monthly flow of blood that can lead to lung collapse. Desiring to call attention to the little-known disease, the author vibrantly recalls her 13-year struggle with the illness, the three major surgeries she underwent (in Army, Navy and Air Force hospitals) and the seven chest-tube procedures. She charts her progress and backslides, the expression of her symptoms and her close brushes with death. She also includes the surgeons’ narrative summaries of her operations. During her protracted battle with the disease, she faced countless debilitating procedures, including colonic resections and an abdominal hysterectomy with bilateral salpingo-oophorectomy. Though it may be expected that a military officer address each piece of new bad news with dignity and resolve, readers will still be impressed by Wallace’s fortitude, as well as the thoughtful, caring impulse that prompted her to write this book: to alert other women to this obscure, diagnostic nightmare of an illness.

A slim but sharp and valuable little book that will go a long way toward helping those who suffer from pulmonary endometriosis.