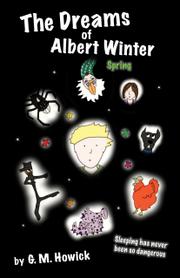 THE DREAMS OF ALBERT WINTER

A middle-grade debut fantasy-adventure novel about a student with a knack for getting in trouble.
After Albert Winter is reprimanded for calling his classmate, Lucy Dredgewater, a mean name and spilling water on another student’s art project, he manages to step in dog poop on the way home. He thinks he’s having a bad day, but things are about to get much worse. Soon, a mysterious voice sends him on a quest to rescue Lucy from a monster. Fortunately, he has some companions on his quest: his loyal Great Dane, Archie; and Stickman, a stick-figure drawing from the aforementioned art project. Together, they face an assortment of villains, including the stinky Squelcher and a bird of prey that bears a certain likeness to Albert’s teacher. They also meet some unlikely allies along the way, including some jelly babies and beautiful chickens that help them vanquish an army of thunder ants. They finally meet up with Lucy, who also turns out to be pretty helpful, and Albert realizes his true feelings for his classmate. The novel blends action and adventure with a healthy dose of humor. Stickman, in particular, provides a lot of comic relief, particularly with his smartphone obsession. In one funny scene, for example, he interrupts the action so that the three adventurers can pose for a selfie, which leads to the discovery of a giant tarantula just above their heads. Howick also provides flashbacks of Albert’s parents that provide some levity, including a memorable scene in which Albert’s father accidentally glues himself to a chair. Even the villains are more entertaining than threatening; as a result, the suspense isn’t likely to frighten youngsters. The book’s brief length may help draw in reluctant readers. Its clichéd conclusion, however, is a disappointment, although a surprise at the very end calls it into doubt.
A funny, exciting novel for young readers that’s likely to find many fans.
Publisher: Dog Ear Publisher
Program: Kirkus Indie
Review Posted Online: Dec. 9th, 2014

JASPER DASH AND THE FLAME-PITS OF DELAWARE
by M.T. Anderson
Children

HANK ZIPZER: NIAGARA FALLS, OR DOES IT?
by Henry Winkler
Newsletter sign-up