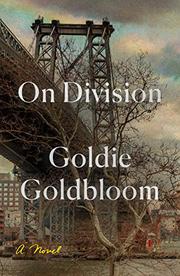 A Chasidic woman is surprised to find herself pregnant.

Surie Eckstein is a 57-year-old Chasidic woman with 10 children. Most of her children are married with children of their own. When Surie discovers that she’s pregnant—with twins, no less!—she’s shocked, of course, but also ashamed, anticipating the responses of her friends and neighbors. They’ll know she’s still having relations with her beloved husband, Yidel. “The women of the community would say mazal tov, but privately, they’d blush for her, the sex-crazed hussy.” So Surie doesn’t tell anyone. Goldbloom (You Lose These, 2011, etc.), who is herself Chasidic, writes with great depth of feeling about this close community but also with humor. Surie grows larger and larger, vaguely hoping that Yidel will figure out her secret without needing to be told. Instead, the secret of her pregnancy becomes twisted up with another painful secret: Surie and Yidel, it emerges, had a son named Lipa who died four years earlier and—to their shame—was gay. Unable to discuss Lipa with Yidel, Surie finds herself unable to discuss the pregnancy, either. In the meantime, time passes. Surie starts helping out at the clinic where she’s receiving prenatal care and, to her surprise, starts to feel a kind of fulfillment there. Goldbloom’s characterization of Surie, and of the whole cast, is wonderfully complex. She shows the joy of belonging to a community as well as the feelings of frustration at its strictures. How can a community bind itself together? How can one person ever truly know another?