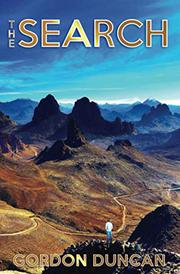 A debut international thriller focuses on a search for an African ruler’s gold.

Duncan presents Joe Logan, a former Army Ranger who has spent a good portion of his adult life in the Middle East and northern Africa. When readers meet Joe, he is not on a covert mission in Sudan but part of a government-funded operation in Boston. Joe is a member of a highly trained team working on a project with the code name Pokey that involves sophisticated software and imaging technology. The team is warned at the outset that spies may be everywhere. After a night out with a few colleagues, Joe takes an interest in the history of an ancient ruler named Mansa Musa. Arguably the wealthiest man who ever lived, Mansa Musa ruled the Mali Empire in West Africa in the early 1300s. He once had so much gold that his dispersal of the metal lowered its value as it became less and less precious. The question for Joe is: What happened to the rest of Mansa Musa’s gold? As Joe utilizes tales from the past and technology from the government to try to answer that question, he is not alone in his search. A Ukrainian woman named Lexi Chekov takes a keen interest in Joe. Lexi works at Harvard as an assistant to one of the directors of African antiquities. She is beautiful and intelligent, though her past is murky at best. Also unbeknown to Joe: Lexi and her boss deal with rare artifacts on a somewhat gray market. The stage is soon set for Joe to uncover a king’s treasure even as others, both known and unknown, attempt to get in his way.

The question of whether or not Joe will uncover the gold and be able to move it somewhere hangs in the balance for quite a while. The author throws a number of factors into the equation, not the least being the legitimacy of Lexi and a mysterious group called “tiger children.” The book also deftly investigates a lesser known mystery of the past. While countless works of international intrigue may incorporate, say, the Knights Templar, the story of Mansa Musa provides material that is not often used, though it’s just as historically odd. The adventure even includes obscure locales such as Mount Stanley, on the border between Uganda and the Democratic Republic of the Congo, a place that due to civil unrest sees few climbers in the present day. But other details are not so captivating. Staff meetings about Pokey can veer into the project’s difficulty with recruitment efforts. As a human resources representative states quite plainly, “There’s a lot of competition for experienced software writers, and it’s difficult to match the offers they are getting from other companies in the region.” This information, while perhaps relevant for a company in Boston, does not exactly add excitement to the plot. Likewise, dialogue can be blandly obvious, as when Joe parts from Lexi and explains without irony: “I look forward to seeing you again.” Still, in the end, the characters journey to places as disparate as Somerville, Massachusetts, and Ethiopia in a story as nuanced as it is eventful.

While portions drag, this tale ultimately takes an exhilarating look at an ancient mystery.