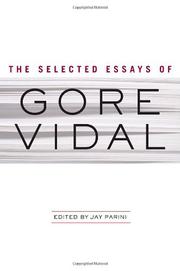 THE COLLECTED ESSAYS OF GORE VIDAL

A splendid, savvy distillation of the best from the veteran novelist and essayist.

This lively volume’s raison d’etre is the inclusion of recent politically charged commentary, but most readers will huddle happily with its several golden oldies. For example, the included non-literary essays conclude with “Black Tuesday,” a reaction to the events of 9/11 that draws the mordant conclusion that “each month we are confronted by a new horrendous enemy at whom we must strike before he destroys us.” Fair—and true—enough, but lesser mortals have made such observations. It took a writer of Vidal’s prodigious gifts to deflate the godlike reputations of the Kennedy clan (“The Holy Family”) and America’s most ebulliently macho chief executive (“Theodore Roosevelt: An American Sissy”), and to examine tax inequity and activism during our early history (“Homage to Daniel Shays”) and the late unlamented 1970s (“The Second American Revolution”). Elsewhere, in a clutch of literary essays, Vidal honors such critically embattled contemporaries as Tennessee Williams, Edmund Wilson and the now-rediscovered Dawn Powell. He’s rougher on others, such as the purveyors of “new fiction” led by maverick innovators Pynchon and Barthes (“American Plastic: The Matter of Fiction”) and university-based scholar-critics who overexplain and obfuscate the obvious (“The Hacks of Academe”). But Vidal strolls through many arenas, offering an affectionately incisive guide to Italo Calvino’s whimsical complexity and a brilliant analysis—really, it’s almost beyond praise—of the industrious and honorable William Dean Howells, whom Vidal has the good sense to admire almost unreservedly.

Nearly six decades’ worth of eloquent bile, dispensed with unmatched craft and wit.