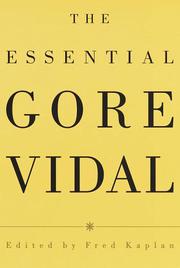 It must seem no less galling than appropriate to Norman Mailer that not even a year after the appearance of his own bulky retrospective volume (The Time of Our Time) there arrives this bracing sampler of his formidable old enemy’s variegated prose wares: on display—in judiciously mixed proportions—are the complete texts of Vidal’s once notorious novel Myra Breckenridge (a then-timely jeu to which the years haven’t been kind) and his outrageously savvy JFK-inspired play (The Best Man); choice excerpts from the loosely related fictional revisions of American history that began with Burr and extend (thus far) to Washington, D.C., and middling ones from other novels varying in quality from apprentice-like (The City and the Pillar) to dizzyingly inventive (Duluth) and urbane (Julian). Twenty-five miscellaneous essays and reviews offer eloquent tribute (“Eleanor Roosevelt,” “Montaigne”), incisive political analysis (“The Day the American Empire Ran out of Gas”), and inspired mockery (“Ronnie and Nancy: A Life in Pictures”). Essential work, indeed, and a good deal more fun to read than the work of many other highly esteemed writers who take themselves much more seriously.