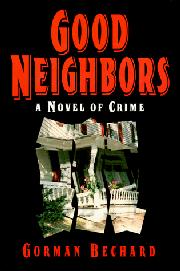 The day after Reggie DeLillo’s dog Molasses was poisoned by the boy next door, Reggie, who threatened to kill David Robertson when the boy admitted what he’d done, is discovered in the Robertsons’ house standing over David’s dead body with gun drawn. Officer Peter Castagnetti, the rookie who stumbles onto the scene, draws his own weapon and shoots Reggie dead. The sad story is over—except that the bullet dug out of David’s body doesn’t match the automatic Reggie was brandishing. Reggie’s friend Juke Miller, an ex-cop who took early retirement seven years ago—after his wife was raped and murdered by parties unknown, and Internal Affairs didn’t buy his story about who drew first in Juke’s shootout with a criminal creep—can see why Reggie allowed Castagnetti to kill him, even going so far as to draw his fire. But if Reggie didn’t shoot David Robertson, who did, and why? Stirring up the ashes of misnamed Harmony, Conn., Juke looks for a reason the straight-A high-school football hero would’ve poisoned Molasses in the first place—and comes up with a roll of photos pointing to a secret even uglier than the scenario he’d started with. Bechard (The Second Greatest Story Ever Told, 1991, etc.) puts so much less energy into the neighborhood mystery than into the neighborhood that a series starring sensitive, tormented Juke seems assured.