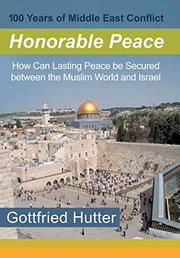 Debut author Hutter offers a hopeful solution to the violent conflict between the Israeli government and the Palestinian Authority.

Many people consider this long-running dispute to be fundamentally intractable, but the author writes that he finds reason for optimism in historical examples—and what he sees as the nature of religion itself. He first establishes the historical context in which the crisis emerged in the 20th century, when Jewish people fled to the Middle East to establish a sanctuary from oppression. Israel’s statehood was interpreted as a threat by the Palestinians and the Muslim community at large, who saw it as an “utterly unacceptable outrage” manufactured by colonial powers, Hutter says. However, he asserts that the Palestinian community, and Muslims at large, were insufficiently empathetic to the plight of Jews, whose existence as a people was endangered. The author goes on to say that both religions contain deep reserves of compassion and the will necessary for reconciliation—theological virtues that have appeared time and time again throughout history. This “peace potential,” he points out, is a feature of all three major Abrahamic faiths, citing as evidence a meeting between the grand imam of the Al Azhar Mosque in Cairo and Pope Francis in 2016. Hutter makes several concrete and refreshingly original political proposals in this book; he advocates an arrangement that would permit the sharing of the great “Noble” shrine al-Haram al-Sharif (aka the Temple Mount) in Jerusalem, and another that addresses the incorporation of controversial Jewish settlements into a new Palestinian state. However, the crux of any lasting détente, he avers, can’t only be political, but also must involve public declarations of religious respect, including mutual expressions of empathy and contrition. The author lucidly chronicles the long arc of the conflict, discussing the history of relations between devotees of the three Abrahamic religions. His approach is eclectically multidisciplinary, which is unsurprising, given that Hutter is a Catholic theologian, psychotherapist, and Sufi master. However, even he acknowledges that his proposals may strike others as akin to a “fairy tale,” due to the animosity that exists on both sides of the conflict.

A thoughtful, though ultimately unpersuasive, approach to Middle East peace.