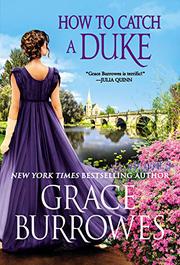 HOW TO CATCH A DUKE

From the Rogues to Riches series, volume 6

A woman inquiry agent seeks assistance from a ducal heir and winds up falling in love.

Formidable and imposing Abigail Abbott is in danger after a marquess requested she hand over some letters and she refused. She turns to clever Lord Stephen Wentworth, heir to the Duke of Walden, requesting he help fake her death so she can escape harm’s way. Stephen instead proposes a courtship of convenience. Because of his title, she would be protected with him as an ally. As they spend time together to ensure her safety, they reveal truths about their pasts, explore their physical desires for each other, and uncover more mysteries regarding the letters and the people interested in them. This installment in the Rogues to Riches series features familiar faces and Burrowes’ superb writing. Despite Abigail’s circumstances, the story has little conflict until some late twists amp up the drama. The pace is mostly unhurried, sometimes overly so. Abigail and Stephen genuinely like each other throughout the book, so the romance itself feels quite low stakes, even with their differences in station and morals—Abigail is an anti-violence lapsed Quaker while Stephen designs guns. Stephen uses canes to walk due to an injury in his youth, and this disability is deftly handled. Additionally, his candor regarding past trysts, with both women and men, is refreshing. Secrets and mysteries add some intrigue, but it’s the strength of the adept and captivating leads that carries the story.