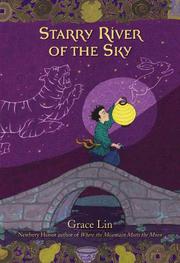 STARRY RIVER OF THE SKY

From the Where the Mountain Meets the Moon series, volume 2

When a troubled runaway arrives in an isolated Chinese village where the moon has disappeared, he initiates a quest to find the missing orb and resolve his past.

Escaping from home in a merchant’s cart, Rendi’s abandoned in the Village of Clear Sky, where the innkeeper hires him as chore boy. Bad-tempered and insolent, Rendi hates Clear Sky, but he has no way of leaving the sad village where every night the sky moans and the moon has vanished. The innkeeper’s bossy daughter irritates Rendi. He wonders about the innkeeper’s son who’s disappeared and about peculiar old Mr. Shan, who confuses toads with rabbits. When mysterious Madame Chang arrives at the inn, her storytelling transports Rendi. She challenges him to contribute his own stories, in which he gradually reveals his identity as son of a wealthy magistrate. Realizing there’s a connection between Madame Chang’s stories and the missing moon, Rendi assumes the hero’s mantle, transforming himself from a selfish, self-focused boy into a thoughtful young man who learns the meaning of home, harmony and forgiveness. Lin artfully wraps her hero’s story in alternating layers of Chinese folklore, providing rich cultural context. Detailed, jewel-toned illustrations and spot art reminiscent of Chinese painting highlight key scenes and themes and serve as the focus of an overall exquisite design.

A worthy companion to Lin's Where the Mountain Meets the Moon (2009).