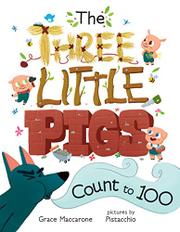 THE THREE LITTLE PIGS COUNT TO 100

by Grace Maccarone ; illustrated by Pistacchio

As the title indicates, the story overtly embeds math content in its text. First, one mother pig cuts two apples in half so that she and her three children can have a snack, but since they’re still hungry, she sends them off to seek their fortunes. The first two pigs acquire their respective, traditional building materials, with the text identifying five bundles of hay to build a cylindrical hut and six sticks (and some sheets) to build a conical teepee. The wolf’s huffing and puffing gives both pigs time to escape, and it also apparently slows him down enough that the third pig has time to reject various materials—seven baskets of wool, eight bags of leaves, nine boxes of rose petals, 10 pails of peanuts—until he finds someone (the Gingerbread Man) selling bricks and buys 100 for a bunkerlike house in the shape of a cube. After failing to huff and puff this house down, the wolf becomes a vegetarian, and the pigs gather in the brick house for dinner. A few extra pages prompt readers to revisit the shapes and numbers from the story, but these feel superfluous to the book rather than integral and enriching. Digital art cleverly incorporates metafictive references but is otherwise undistinguished.

Count on other retellings for the fractured–fairy-tale shelf.