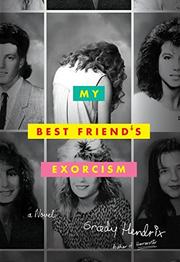 The wonder of friendship proves to be stronger than the power of Christ when an ancient demon possesses a teenage girl.

Hendrix was outrageously inventive with his debut novel (Horrorstör, 2014) and continues his winning streak with a nostalgic (if blood-soaked) horror story to warm the hearts of Gen Xers. “The exorcist is dead,” Hendrix writes in the very first line of the novel, as a middle-aged divorcée named Abby Rivers reflects back on the friendship that defined her life. In flashbacks, Abby meets her best friend, Gretchen Lang, at her 10th birthday party in 1982, forever cementing their comradeship. The bulk of the novel is set in 1988, and it’s an unabashed love letter to big hair, heavy metal, and all the pop-culture trappings of the era, complete with chapter titles ripped from songs all the way from “Don’t You Forget About Me” to “And She Was.” Things go sideways when Abby, Gretchen, and two friends venture off to a cabin in the woods (as happens) to experiment with LSD. After Gretchen disappears for a night, she returns a changed girl. Hendrix walks a precipitously fine line in his portrayal, leaving the story open to doubt whether Gretchen is really possessed or has simply fallen prey to the vanities and duplicities that high school sometimes inspires. He also ferociously captures the frustrations of adolescence as Abby seeks adult help in her plight and is relentlessly dismissed by her elders. She finally finds a hero in Brother Lemon, a member of a Christian boy band, the Lemon Brothers Faith and Fitness Show, who agrees to help her. When Abby’s demon finally shows its true colors in the book’s denouement, it’s not only a spectacularly grotesque and profane depiction of exorcism, but counterintuitively a truly inspiring portrayal of the resilience of friendship.

Certainly not for all readers, but anyone interested in seeing William Peter Blatty’s infamous The Exorcist (1971) by way of Heathers shouldn’t miss it.