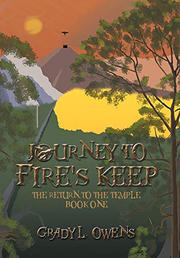 From the The Return to the Temple series, volume 1

In this debut fantasy, two friends seek revenge after a tragedy.

Stephen and his half-elven friend Angelo live in the safe and beautiful town of Springsboro. But they leave on a casual hunting trip and when they return, the entire town is burned to the ground. There are no survivors. While hunting, Stephen and Angelo had taken cover from a mysterious storm that blew in. This was no ordinary tempest; it was magic, the workings of Asmodeious, a master sorcerer. Asmodeious is the one who torched Springsboro. Stephen and Angelo want to punish the culprit who killed their friends and family, and the two set out on a quest to find the murderer. What they don’t know is that Asmodeious and his half-orc apprentice, Diablo, live on the edge of a volcano and that the sorcerer knows more about Stephen’s latent power than the hero himself. For a novel hinging on retribution, this is a surprisingly funny book. If naming the sinister sidekick Diablo wasn’t enough of a clue that the villains would be over the top, the sorcerer is unapologetically evil, shouting things like “No one gets killed by Asmodeious and lives!” While the backdrop isn’t as melodramatic as the villains, Owens’ world is a refreshing take on elves and orcs. The inventive realm blends modern living with traditional fantasy elements. Stephen answers the door in his boxers before donning his hunting armor. And when Diablo casts a cauldron spell, the pot displays “a menu with three options: security, alarm, and browse.” The humor seems effortless, and each discovery of how modernity fits into the conventional fantasy landscape is a delight. Still, the story has some tonal problems. Owens is at his best with two extremes: humor and a more solemn tone that’s standard for a traditional fantasy. He employs the latter in this vivid description of mountains: “Passes were designated early in the history of civilization, and indeed even a few cities sprang up amongst the jagged peaks, clinging to the very rock like a lichen, every bit as sensitive.” But these extremes affect how readers view the characters’ emotions. It’s hard to take Stephen’s and Angelo’s grief over Springsboro’s destruction seriously and yet their deep sorrow is the tale’s catalyst. This is the first installment of a series, so perhaps the tone will even out in the sequel.

A fun, amusing, and innovative fantasy.