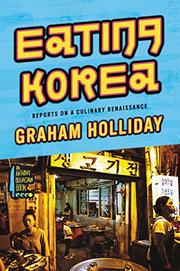 Reports on a Culinary Renaissance

A British journalist who lived in Korea in the 1990s chronicles his return in 2015, when he found the culinary landscape transformed, mostly for the better.

It didn’t seem promising when a friend took Holliday (Eating Viet Nam, 2015) to a small restaurant in downtown Seoul and invited him to eat pizza flavored with fruitcake, proclaiming, “this is the future.” While teaching in Korea 20 years earlier, the author fell in love with its down-home, superspicy food; fruitcake pizza was not his idea of a good development. However, he was excited by the new pride Koreans take in their cuisine, no longer embarrassed that it is “too smelly, too spicy.” So Holliday decided to travel around the country sampling its quintessential dishes. He fears—as he notes a few too many times—that traditional Korean food is disappearing like the old hanok bungalows bulldozed to make way for skyscrapers. On the contrary, he discovered, the new cooks take pride in reclaiming old recipes. As the narrative moves out of Seoul into the provinces, the author makes palpable the “glorious stench” and mouth-burning tastes of a highly spiced cuisine, from kimchi to bibimbap, a one-bowl festival of flavors that is a specialty of the city of Jeonju. Like many food books, the parade of one meal after another can become wearying, and Holliday’s lingering descriptions of textures and substances that are bizarre by Western standards (“it was as if a urinal cake were now lodged inside me”) are not for the squeamish. But his cook’s tour also includes interesting observations on Korea’s rapidly changing society: the increasing assertiveness of its once-subservient women counterpoised against the rage for plastic surgery, its “quickly-quickly” culture contrasted with the mysterious concept of han, a state of soul combining “irresolvable pain [and] unrealizable dreams” that Koreans regard as a uniquely national quality.

The navel-gazing about the pluses and minuses of modernization is expendable, but Holliday provides a lively snapshot of an ancient culture in transition.