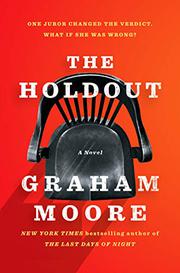 Maya Seale, a white, bilingual transplant from New Mexico, is both a 36-year-old criminal defense attorney and a 26-year-old juror in a novel that jumps between two storylines, one set in 2019 and one in 2009. In the latter, Maya was the lone not-guilty holdout in a Los Angeles jury that eventually flipped and acquitted Bobby Nock, a 25-year-old black part-time English teacher, in a high-profile murder trial. Bobby was accused of killing one of his students, Jessica Silver, the 15-year-old white daughter of a property titan worth billions. But there was no body. Rick Leonard, a black juror, is plagued with guilt over the acquittal and dedicates a decade to discovering the jurors’ closely held secrets and proving Bobby’s guilt. These efforts result in a deal for an eight-hour true-crime docuseries on Bobby, the trial, and the jurors who acquitted him. After 10 of the 11 living jurors gather at a hotel in 2019 to begin taping, Rick is found dead in Maya’s hotel room. The book’s second storyline follows Maya, now a murder suspect herself, as she tries to clear her name. Author Moore’s (The Last Days of Night, 2016, etc.) background as a screenwriter is apparent in this dialogue-heavy book that features a cast of more than two dozen and two storylines that unfold concurrently. The characters in each might be the same, but they are simultaneously heroes and villains, flawed people with god complexes, and individuals just trying to do their best for themselves and, perhaps, others. The characters’ emotions as they argue and discuss issues such as race and justice feel flat, however, as if actors are required to bring their voices to life.

An intriguing story that begs to be finished but reads as if it should be a bingeworthy TV series instead.