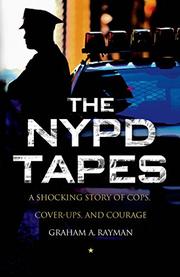 A Shocking Story of Cops, Cover-ups, and Courage

by Graham A. Rayman

Introducing the major players in this drama right at the climax of its conflict, the author’s account is immediately striking. Fast-paced and intriguing throughout most of the book, the story remains fascinating even when Rayman goes into intricate detail about the lives of Officer Adrian Schoolcraft and those around him. Schoolcraft’s story became noteworthy when he joined the NYPD in 2002 amid the success of CompStat, an accounting system designed to help the department pinpoint trouble areas for more officers. CompStat and Schoolcraft didn’t mesh well, though, and Schoolcraft believed the system was leading to corruption by those in the precinct who pushed for better numbers. He began wearing a wire to work, recording everything that happened in an attempt to prove not only that the problem existed, but also that it was due to pressure from the top. He went to Internal Affairs with his accusations. After that, his job—already in some jeopardy due to low numbers—became downright distressing. What the department said was simply good management, he saw as harassment and even a threat to his safety. Eventually, he was able to make his story public and bring a lawsuit against the city. The tension remains high throughout, with Schoolcraft’s emotions described exceptionally well. Unfortunately, Rayman’s account feels rather biased in favor of Schoolcraft, and he tends to write off the NYPD’s criticisms of the man. Rayman also tends to repeat the most egregious offenses caught on tape, which loosens the cohesion of the narrative, reminding readers that it is based on a series of shorter pieces.

A fantastic story with enough minor flaws to irritate but enough real-life drama to keep readers coming back.