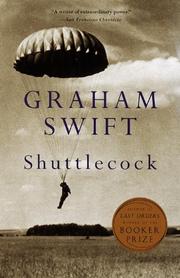 Shuttlecock, Englishman Graham Swift's new novel, is just as spiky as Waterland (1984), and as odd as Learning to Swim and Other Stories (1985). Prentis, a dissatisfied clerk in the ""dead files"" department of the London Police department, suspects that Quinn, his tyrannical bulldog of a boss, is playing games with him--censoring and scrambling up the files Prentis is supposed to decipher for reopened police inquiries--but Prentis cannot figure out how to confront his boss without jeopardizing his own chance for the aging Quinn's job, which he desperately wants. And so: frazzled at work, unhappy at home, Prentis relieves his tensions by abusing his two sons, Martin and Peter, molding his malleable wife Marion into absurd sexual positions, and going to see Dad at the park-like insane asylum where he, the father, has been for the past two years. Eventually, Prentis begins to realize that there's a shadowy connection between the material being withheld by Quinn and his father's past as a famous British spy who escaped from the Nazis. Prentis's private investigations and a final confrontation with Quinn at the latter's flower-filled town house confirm his suspicions; however, Prentis is surprised to find out that the tyrannical Quinn has actually withheld information not out of malice, but because he wants to prevent the younger man from being hurt--the withheld files suggest that Prentis' father, code name Shuttlecock, cooperated with the Nazis and was ""allowed to escape."" Swift's latest book is billed as a ""psychological thriller,"" but Shuttlecock is almost entirely lacking in suspense. As a character study of a small-minded, petty British Civil Servant, it works for a while, but only the most complacent reader will not be put off by the abrupt character reversals, the obvious parallels between past and present that Swift uses to give his narrative more structure, and that fact that Shuttlecock, for all the fluency of Swift's liquid style, is slow, slow, slow. Readers looking for a suspense novel would do better elsewhere: Shuttlecock is a wooden bird.