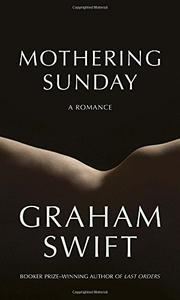 In England of 1924, a maid who knows her affair with an estate owner’s son must end moves through that last day with sly humor and sensual detail.

Swift (England and Other Stories, 2015, etc.) subtitles this slim novel “A Romance” and begins it like a fairy tale, with the words “Once upon a time.” It’s the first of numerous ironies. Narrated in the third person from the point of view and stream of consciousness of housemaid Jane Fairchild, 22, the story moves through the closing hours of her affair with Paul Sheringham, 23, the only remaining child of parents who lost their two other boys during World War I. It's Mothering Sunday, when domestics traditionally visit their mothers. Not only is the help vacating the Sheringham premises, but Paul’s parents are away on a lunch outing. Many languorous post-coital pages describe how Paul moves naked about his bedroom, how he and Jane share a cigarette in bed, and finally his getting up and dressed and on the road to meet with the woman he is to marry in two weeks. Then come many equally unhurried pages in which Jane wanders naked around the empty house. The one-day time frame is broken by flashbacks to her days as an orphan, her coming into service, and aspects of life above and below stairs. The narrator also steps in to share with the reader things Jane doesn’t yet know: that she will die at 98 after a career as a famous novelist and that Paul, for reasons only a spoiler would reveal, will never marry. Jane is a marvelous creation who can seem wry, world-weary, innocent, or lusty, bringing to mind Molly Bloom.

Swift has fun with language, with class conventions, and with narrative expectations in a novel where nothing is as simple or obvious as it seems at first.