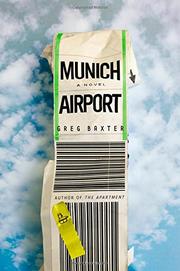 A grim parable of familial disconnect and purposeless existence set in a fog-bound German airport over one very long day.

After his critically acclaimed fiction debut (The Apartment, 2012), Baxter has raised the level of difficulty with his second novel—for himself and for the reader. There are no chapter breaks, and a paragraph can go on for pages. The entire novel takes place inside the head of an unnamed narrator who seems matter-of-fact at first but who descends through levels of emotional disturbance (recurring nightmares, panic attacks, self-laceration and other compulsions) as the tale progresses. And yet the tale never really progresses but keeps circling through memory and projection as the narrator spends a day’s eternity in the titular airport with his father, waiting to accompany his younger sister's corpse back to America. The sister, who had had little contact with either her brother or father since moving to Berlin, died of starvation. The narrator has also had little contact with his father since moving to London, where he had a brief, unhappy marriage with a woman he never names (other memories involve characters whose names he says he has forgotten) and left corporate employment for his own marketing consultancy business. Father and son have very little to say to each other, but a third character, Trish from the American Consulate, serves as a connection between the two and adds what little plot development there is. Mostly, the narrator suffers: “The light turns sickly. I start to shake. My mouth starts to water. A sickness that feels a little like nostalgia sets in. Then I begin to see the words I am thinking, individual words, and they become repulsive. A word like blue becomes repulsive. A word like airport. Their existence is depressing.”