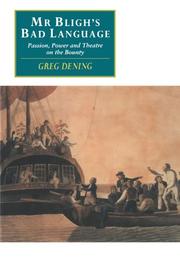 A learned, humane, provocative ""creative reading"" of the mutiny on the Bounty--the events; their meaning and representation in native lore, British life, the theater, and cinema; and their historical value. An engaging style and familiarity with political, naval, theater and film history, with anthropology, and with thinkers such as Foucault, Barthes, and LÃ‰vi-Strauss enrich this ""celebratory narrative,"" as Dening (History/Univ. of Melbourne) calls it. The story is familiar but, Dening says, the emphasis, meaning, explanation, and value change depending on the point of view, the period, culture, and medium in which one represents the character of Bligh (a perfectionist who preferred to avoid physical punishment) and the sailors; the idea of discipline in the navy; the participants' various expectations; the natives they encountered; the brutality and brutalization, abandonment and retribution; and the survivors' colony on Pitcairn Island. In the theatrical terms Dening employs, the mutiny becomes an enactment of roles, a ritual representing universal experiences of sacrifice, deification, resurrection, possession, encounters between natives and strangers, and the ranging iconography of power as it appears among natives and seamen. Dening's ""cliometrics"" (the statistics on corporeal punishment in the navy); his discussions of Jonas Hanway, of Captain Cook's adventures among the Polynesians, of the British popular theater, of the five films based on the Bounty (including the moral one in the 30's, the political one in the 60's, and the psychological one in the 80's); the encyclopedic knowledge he brings--all add conviction to his imaginative interpretations and demonstrate his proposition that ""history is something we make rather than something we learn."" A fascinating, essential chapter in the history of the Bounty.