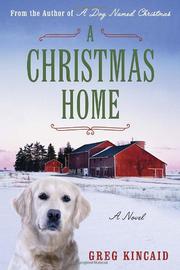 The latest in Kincaid’s series about a developmentally challenged young man and his penchant for helping dogs is pleasant enough, but breaks no new ground.

Following on the heels of Kincaid’s other novels about likable canines (A Dog Named Christmas, 2008, etc.), this book finds Todd McCray all grown up into a capable young man who works for the animal shelter in the quaint town of Crossing Trails. But both his job and the town's very existence are threatened when the major employer in Crossing Trails shuts down. Suddenly, the small town of 2,000 finds itself making major cutbacks and one of those is, by necessity, doing away with the small, but busy, animal shelter. Todd and his boss, Hayley, are told by the town’s mayor that the shelter will shutter its doors no later than the first of the year, and it’s already more than a week into December. Both take the news hard, especially since the shelter has dozens of homeless dogs and cats and very few options other than sending their animals to facilities that will kill them if they aren’t adopted. With his parents, George and Mary Ann, his friend Laura and her service dog, Gracie, which Todd trained, and the assistance of other friends and residents of the tiny town, Todd looks for an alternative solution, promising none of the animals under his care will be forgotten. Kincaid, who obviously loves animals, presents a too-good-to-be-true community with a plot straight out of a television movie-of-the-week and then throws his characters through clichéd hoops. Although the solutions the group finds along the way are way too easy to come by and never seem to have a downside, the characters and settings prove pleasant enough. The writing, which is simplistic, won’t engage sophisticated readers, but for those seeking a slight, uncomplicated tale that can be read cover-to-cover in about a weekend and won’t leave the reader searching for some deeper meaning, this book fits the bill and then some.

Although rated for adults, Kincaid’s writing level seems more compatible with young adult novels in both verbiage and complexity.