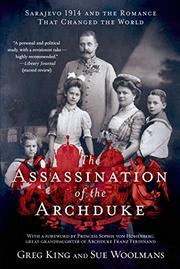 THE ASSASSINATION OF THE ARCHDUKE

Sarajevo 1914 and the Romance that Changed the World

The vilified heir to the Hapsburg throne wins a touching rehabilitation in this nonscholarly look at his love match and sad demise.

King (A Season of Splendor: The Court of Mrs. Astor in Gilded Age New York, 2008, etc.) and Woolmans (25 Chapters of My Life: The Memoirs of Grand Duchess Olga Alexandrovna, 2010) find a juicy story in the scandalous romance of the Hapsburg emperor’s nephew, whose marriage pact with Sophie Chotek may have helped contribute to his assassination in Sarajevo. By 1900, the old reactionary Emperor Franz Joseph I had been on the throne of the Austro-Hungarian confederation for more than 50 years, outliving several younger heirs to the throne, including his own son, Rudolf, who committed suicide. The emperor never liked his nephew, Franz Ferdinand, who was a cautious, piously Catholic, army-trained 35-year-old with “watery blue eyes” and who may have harbored reformist tendencies. The one daring act of his life was the choice of Sophie as his bride. A serene, mature Bohemian aristocrat, daughter of an impoverished diplomat, she was unequal to the station of an emperor’s wife. Despite the emperor’s injunction against marrying her, Franz Ferdinand finagled an official agreement that allowed him to marry Sophie if he signed a “morganatic union,” which prohibited her from inheriting rights to the Hapsburg throne. Indeed, while the marriage seemed wonderfully happy, resulting in a loving, bourgeois home life, the exclusion of Sophie from nearly all official duties next to her husband caused the couple nearly 15 years of torment and added to the general animosity against the couple in the kingdom. The ill-planned visit of Franz Ferdinand and Sophie to Bosnia “to attend maneuvers” is depicted in this light-pedaling study as a “colossal” setup.

An entertaining challenge to a century of misconceptions.